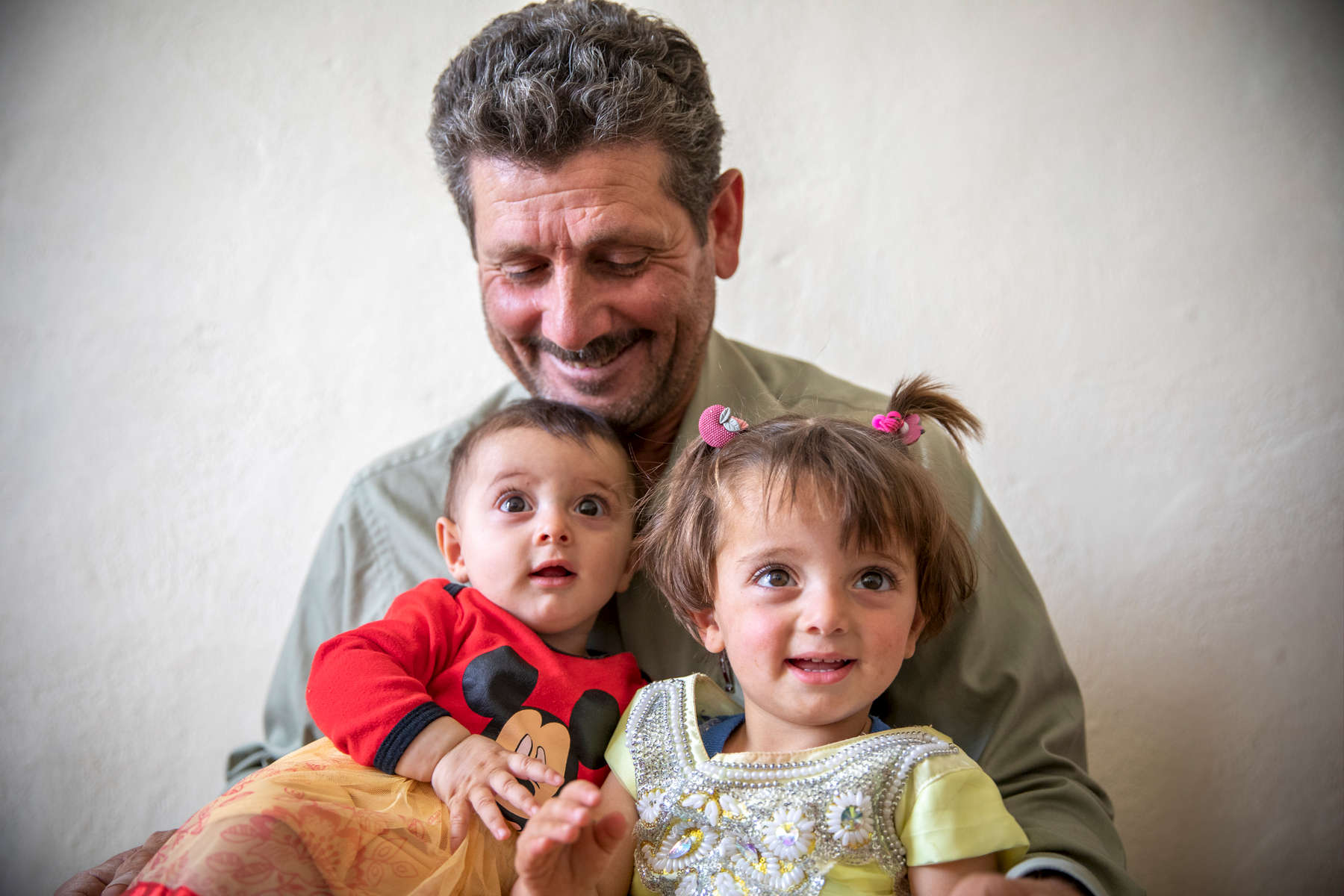 
Ahmad, 51, holds his granddaughters Zinab, 2, and Bilasan, 6 months. They are Syrian refugees living in an informal tent settlement. They fled Syria in 2012 when a bomb destroyed their home. Since then, they have lived in a tent community with 23 other families, where Ahmad built a schoolhouse that teaches more than 40 Syrian kids.

Ahmad was a farmer back in Syria, but when he saw how none of the children in this community could read or write, he decided to be their teacher. The walls of his classroom are covered in posters teaching English, Arabic, science and math, while the ceiling is decorated with recycled materials the children gathered. “I try to put hope for the children here. So I’m proud of what I did,” he says.

More than 700,000 Syrian refugee children are out of school. Ahmad built this classroom so that when the time comes for the kids in his community to return to Syria, they’ll be ready to pick up their education again. “I built everything here by myself,” he says. “I started this to teach children here, because if I didn’t, they would take their own direction in their life and do the wrong thing, like drugs or going to the streets. Children in this generation are our future. Because of that, I started this school.”

Ahmad’s school teaches children ranging from ages 5 to 13. They meet from 8 a.m. to noon, six days a week. At first there were no chairs, and the students sat on rocks in the sand. The community pulled together to help buy carpet, stools, and school materials. “It’s a benefit for everyone here,” he says.

Ahmad uses Khabrona, a digital platform built by Mercy Corps and Cisco to help refugees access critical services through their cell phones. Once he used the app, he was able to get documentation for his son to live legally in the country. “I felt relief,” he says. “I felt like I was legal because I could go back and forth and my child could go back and forth … This program really helped a lot of families.”

Ahmad lives about 13 miles from the Syrian border—close enough to hear the sound of airstrikes in the distance. The sound is a reminder of the life he used to have and the struggles he’s endured for his family’s safety. “I used to own a farm, now I’m working for a farmer. I used to make people work for me and respect them, now I’m working for someone who doesn’t respect me,” he says. “It was really hard. We have a lot of depression.”

Ahmad has a close relationship with the kids in his school, who call him Teacher or Uncle. When the kids hear the airstrikes, they often come to him to ask him to explain it. “Most of the children actually didn’t live this, so at first they didn’t know,” he says. “They thought it was fireworks. But after they go back to their parents and start to see the news, they come back to me and ask me about it, “We saw the news and people died and everything.” I tried to make the picture better, but you can’t. I tried, but it will stay a black picture because someone died.”